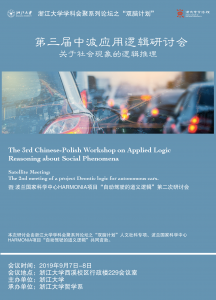 Social phenomena means a form of collective behaviour, such as accepting or rejecting innovations in technology. The aim of this workshop is to find a formal language to describe the dynamic impact (e.g. market, social norms, and their temporal reproduction) on people’s collective behaviour. One example we want to address in particular is a formal account of expected social behavior and reception of autonomous cars. Applying a logic to reason about social phenomena should result in patterns of making predictions and explanations of what happened and what may happen under some borderline conditions.

This workshop is one of the series of international workshops on applied logic organized in China or in Poland. The first workshop of the series took place in Beijing at Beijing Normal University in December 9-10th, 2017 (http://kognitywistyka.kul.pl/chinese-polish-workshop-applied-logic/); the second – in Toruń at Nicolaus Copernicus University in Toruń in September 28th, 2018 (http://ncl.umk.pl/LNK18/ProgramPCHw.pdf).

A special issue of Bulletin of the Section of Logic  (http://www.filozof.uni.lodz.pl/bulletin/) connected to the subject of the workshop: Reasoning about Social Phenomena is planned. The editors are Tomasz Jarmużek, Fengkui Ju, Piotr Kulicki and Beishui Liao.