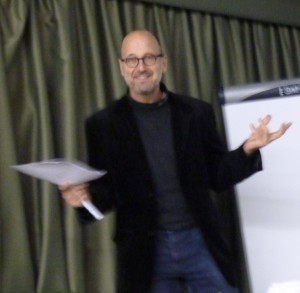 Hans van Ditmarsch obtained a PhD at the University of Groningen in 2000. He lectured at the University of Otago from 2001-2007 and remained affiliated to that university until 2010. In 2007-2008 he was a CNRS researcher at IRIT (Institut de Recherche en Informatique de Toulouse) and in 2008 a Lorentz Fellow at NIAS (Netherlands Institute for Advanced Study in the Humanities and the Social Sciences). In 2009 he joined the University of Sevilla as a senior researcher on a five year (2009-2014) project on unconditionally secure protocols. December 2012 he joined LORIA (Laboratoire Lorrain de Recherche en Informatique et ses Applications), Nancy, as a senior researcher, where he is heading the section (equipe) called CELLO (for: Computational Epistemic Logic in LOrraine). From 2010 onward he has been an associated researcher at IMSc (Institute of Mathematical Sciences), Chennai. His research is on the dynamics of knowledge, information-based security protocols, modal logics for belief revision, proof tools for epistemic logics, combinatorics, and computer and information science education. Since 1996 he has regularly contributed to ESSLLI with graduate courses and workshops and was a co-chair of ESSLLI Hamburg 2008. He has also taught at NASSLLI Bloomington 2010 and ISLA Hyderabad 2010. Conferences that he has organized and chaired include 7th M4M Osuna 2011, 3rd Tools for Teaching Logic Salamanca 2011, 3rd LORI Guangzhou 2011, and 11th LOFT Sevilla 2012. He has given keynote presentations at, among other occasions, 16th EBL Petropolis 2011, 19th WoLLIC Buenos Aires 2012, SAICSIT 2012 Tschwane, and 29th ICLP Istanbul 2013. Recently appeared books include: Handbook of Epistemic Logic, College Publications, 2015 (edited with: Joseph Y Halpern, Wiebe van der Hoek, and Barteld Kooi); and One Hundred Prisoners and a Light Bulb, Copernicus, 2015 (with Barteld Kooi).

Title: Epistemic Gossip Protocols
Abstract: A well-studied phenomenon in network theory since the 1970s are optimal schedules to distribute information by one-to-one communication between nodes. One can take these communicative actions to be telephone calls, and protocols to spread information this way are known as gossip protocols or epidemic protocols. Statistical approaches to gossip have taken a large flight since then, witness for example the survey “Epidemic Information Dissemination in Distributed Systems” by Eugster et al. (IEEE Computer, 2004). It is typical to assume a global scheduler who executes a possibly non-deterministic or randomized protocol. A departure from this methodology is to investigate epistemic gossip protocols, where an agent (node) will call another agent not because it is so instructed by a scheduler, but based on its knowledge or ignorance of the distribution of secrets over the network and of other agents’ knowledge or ignorance of that. Such protocols are distributed and do not need a central scheduler. This comes at a cost: they may take longer to terminate than non-epistemic, globally scheduled, protocols. A number of works have appeared over the past years (Apt et al., Attamah et al., van Ditmarsch et al., van Eijck & Gatting, Herzig & Maffre) of which we present a survey, including open problems yet to be solved by the community.

DONG Jun, who gained Ph.D. in Zhejiang University, China in 1997, was awarded as “Hundred Talent Program of Chinese Academy of Sciences” in 2009 and works in SINANO, CAS from 2010 on. Before that, he had experience in industry for nearly 9 years, and was evaluated as full professor in 2002 in ECNU. He has been awarded several other talent titles such as “Innovation and Entrepreneurship Talent Program” of Jiangsu Province(2013), “Leading Talent” of SIP of Suzhou City(2011), “Baosteel Excellent Teaching Staff” of Baosteel Education Foundation(2008) and “Excellent Discipline Leader” of Shanghai City(2008) respectively. His research interest is artificial intelligence including computer-aided medical diagnosis, Chinese calligraphy creating simulation etc. He has published about 90 academic articles and 4 monographs.

Title: Electrocardiogram (ECG) Analysis — From Domain Experience to Classification
Abstract: The core issue of artificial intelligence is thinking simulation. We use the electrocardiogram (ECG) as an example. Here, Abstract and logical thinking work alongside with imagery thinking and experience analysis, and the physician’s diagnosis has both macro precepts together with micro particulars. Meanwhile, a few problems restrict clinical acceptance of the many theoretical ECG analysis methods developed during the last forty years, such as whether they are identical with thinking patterns in the physicians’ brain, and whether extracted ECG features are sufficient and necessary. Based on the Chinese Cardiovascular Diseases Database (CCDD, http://58.210.56.164: 88/ccdd/）we have designed, physicians’ diagnosis experience and relevant formal representation are discussed, implicit knowledge that is hard to express is analyzed, and fusion of rules inference and deep learning for ECG classification is implemented. We have got the better classification result comparing with the state-of-the-art approaches. 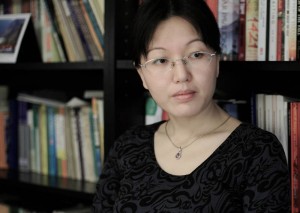 Fenrong Liu, Changjiang Distinguished Professor of Logic at Tsinghua University, Amsterdam-China Logic Chair at the University of Amsterdam, Co-Director of the Tsinghua – UvA Joint Research Centre for Logic. Fenrong works mainly in the field of logics for rational agency. Her research work includes the formal structured models of preference dynamics and modeling different types of agent in terms of logic. She has published a number of papers and books on these topics, notably, Reasoning about Preference Dynamics (Springer 2011). Her recent interest lies in understanding the features of information flow and decision making in social setting, and establishing more realistic models. In addition, she maintains active interests in Chinese Ancient Logic. She is currently editing a Handbook of Logical Thought in China. Fenrong is an Editor-in-Chief of the new book series of Studia Logica Library: Logic in Asia, an editor of Australasian Journal of Logic, an associate editor of Studia Logica and Studies in Logic, and an editorial board member of Synthese and Topoi.

Title: Reasons to Believe in Social Settings
Abstract: I will first explain the issue of social influence and illustrate the importance of evidence and trust relation between agents. Then I will introduce a new logic language that can be used to reason about an agent’s belief  formation and dynamical change,  due to evidences provided by other agents in the society. Some interesting features of social structure can be represented eventually as a update rule. A complete axiomatization will be presented too. This is a joint work with Emiliano Lorini.

Title: Agent, Epistemology, and AI
Abstract: In this talk, I will show how our knowledge and belief are changed by agent communication. We apply dynamic epistemic logic to subtle differences of the result of agent communication, e.g., what is informed, what is known to each other, and what is aware of for each agent. En route, we discuss the reliability of information source, including the notion of communication channel. Thereafter, we apply the idea to analyze several legal cases, and try to explain the relation between the suspect’s intention, the result, and his/her
predictability of causality in them.

Leon van der Torre joined the University of Luxembourg as a full professor for Intelligent Systems in 2006. He developed the BOID agent architecture (with colleagues from Vrije Universiteit Amsterdam), input/output logic (with David Makinson) and the game-theoretic approach to normative multiagent systems (with Guido Boella). He is an editor of the handbook of deontic logic and normative systems (first volume 2013, second volume in preparation), editor of the handbook on formal argumentation (in preparation), editor of the handbook on normative multi agent systems (in preparation), deontic logic corner editor of Journal of Logic and Computation, and member of editorial board of Logic Journal of the IGPL, the  IfCoLog Journal of Logics and their Applications, and the EPiC series in Computer Science. Moreover he is coordinator of the Horizon2020 Marie Curie RISE Network “Mining and Reasoning with Norms” (MIREL, 2016-2019).

Title: Norms and arguments
Abstract: In this talk I discuss two relations between normative reasoning and formal argumentation. First I consider formal argumentation as a kind of normative reasoning. An attack of argument A on argument B is interpreted either as “either A is not accepted or B should be accepted” or as “A and B cannot both be accepted, and it is preferred to accept A over B”.  The difference between the two interpretations is analyzed for higher order attack (where attacks can be attacked) and for contrary to duty argumentation (where arguments that should be rejected are accepted). Second, I apply a theory of structured argumentation to normative reasoning. In an ASPIC+ style setting, I discuss the definition of argument, the role of constitutive and permissive norms, and hierarchical normative systems.